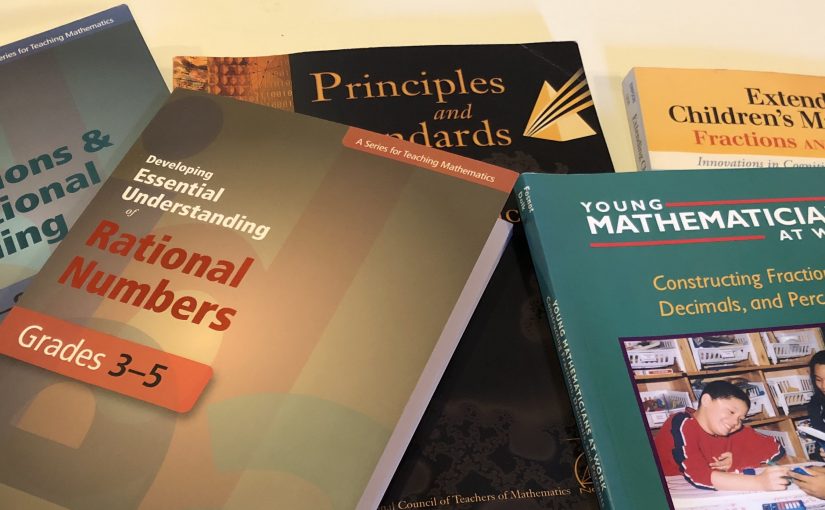 This should be an easy question to answer. I mean, fractions aren’t exactly new. As I’ve dug into this question, I learned that the answer was not as straightforward as I had assumed.

I’ve gotten pretty used to disagreeing with people. It seems there are no shortage of issues about which to disagree. One of my recent disagreements was with my students about the value of stuffing as a Thanksgiving side dish (many of my students were completely wrong, believing that it has any merit at all). Normally I don’t think twice about the disagreement. When I disagree with people I genuinely admire, however, it causes me to pause and think deeply about my position. I recently had just that experience.

While participating in the Thursday evening #ElemMathChat on 1/24 I was caught off guard by some approaches to defining fractions. While exploring some different fractional representations, some presented ratio relationships as fractions (it was something like “I see the fraction 2/3 because there are 2 pears for every 3 oranges”). My first instinct was to say, “I don’t think that’s a fraction. I think that’s a ratio.” Mark Chubb (@MarkChubb3), who was moderating the chat, shared this documentas a reference, supporting the claim that what was shared was, in fact, a fraction. This was the first time that I’ve seen part-part relationships lumped together so clearly with other definitions.

Now, the fact that ratios use a fraction bar is obvious. So why was this an issue for me? I suppose the question I am wrestling with is whether or not every rational number that uses fraction notation should be called a fraction.

I should start by acknowledging all the ways I agree with Mark and the Paying Attention to Fractions document. Focusing on fractions exclusively as parts of a whole is limiting. If students only conceptualize fractions by chopping up pizzas and pans of brownies, they will be woefully unprepared. I applaud the document’s aim of helping teachers understand the complexity of fractions. Let’s take a look at some of that complexity.

Consider for a moment the different meanings of fractions in the following statement:

Even though the exact same fraction occurs twice in that statement, they have vastly different meanings. 1/4 of a gallon is a specific quantity and I could place that quantity on a number line between 1/5 and 1/3. 1/4 full, however, is not a quantity. It establishes a relationship. If a 2-gallon milk jug were 1/4 full, it would have 1/2 of a gallon in it. The exact quantity would depend on container (what we would call the “referent whole”). No wonder fractions are so challenging for students! A simple statement using the exact same fraction could employ completely different meanings.

This is just a fraction of the complexity I could mention (yes, that was intentional). The Paying Attention document does a wonderful job reminding teachers that fractions are more complex than parts to whole relationships and it does well identifying valuable models worth exploring.

Let’s Settle this! What’s the Definition?

When I first started asking this question I went back to all the books I’ve used to learn about fractions. Here are some of the ways fractions are discussed:

NCTM’s Principles and Standards for School Mathematics notes, “During grades 3-5, students should build their understanding of fractions as parts of a whole and as division” (p. 150). And then later it states, “In the middle grades, students should… recognize and use fractions not only in the ways they have in lower grades—as measures, quantities, parts of a whole, locations of a number line, and indicated divisions—but also in new ways. For example, they should encounter problems involving ratios, rates, and operators” (p. 216).

NCTM’s Developing Essential Understanding of Rational Numbers: Grades 3-5 provides a clear definition as it states, “a fraction is a symbolic expression of the form a/b representing the quotient of two quantities (provided, as always, that the divisor b does not represent zero)” (p. 15). In other words, if it looks like a fraction, it’s a fraction.

From the CGI world, in Extending Children’s Mathematics: Fractions and Decimals it notes that “fractions do not have a single meaning, such as n parts out of m parts. They can stand for amounts of stuff, such as 3/5 of a candy bar. They can stand for relationships between amounts, such as 3 candy bars for every 5 children, or the processes involving amounts, such as 3 candy bars shared among 5 children. They can also of course be interpreted in terms of mathematical models, such as points on a number line or ordered pairs of numbers satisfying certain properties, as in the formal mathematical definition for rational numbers” (p. xxi-xxii). The authors go on to emphasize the importance of the multiplicative relationship that exists in any fraction.

The Paying Attention text seems to lean most heavily on Van de Walle’s work (which I think is pretty great). Elementary and Middle School Mathematics: Teaching Developmentally has the same definitions for fractions as the Paying Attention document, explicitly including part-part relationships.

Sowder, Sowder, and Nickerson’s Reconceptualizing Mathematics for Elementary School Teachers separates the “part-whole meaning” from the “division meaning”, from the “ratio meaning”.

Finally, Beckmann’s Mathematics for Elementary Teachers is one of the only resources I scoured that eschewed the ratio definition. “Then the fraction A/B of our whole is the amount formed by A parts (or copies of parts), each of which is 1/B of the whole”.

It seems that nearly all of my favorite resources support calling ratios “fractions”. I should have stopped there and been happy that I had learned something new, but every time I thought of a 4thgrade teacher showing a 2 apples for every 3 oranges relationship, writing it as 2/3 and saying, “And here’s another fraction!” I got really worried. So, I went back to those very books to see how part-part relationships were handled. What I found was that once they defined fractions these resources almost immediately separated the term fraction from ratio and treated the terms differently.

Consider the following outcome from the Van de Walle chapter on Ratio, Proportions, and Proportional Reasoning: “Describe the essential features of a ratio, including how it relates to fractions, and articulate ways to help students understand and be able to use ratios.” What does the term fraction mean here? Does that statement even make sense if I neatly fold ratios (part-part and part-whole relationships) in with fractions? Clearly the term fraction is offset from the term ratio, recognizing similarities and differences in which those quantities exist. In fact, the rest of the Van de Walle chapter that I referenced earlier (that explicitly includes part-part relationships) goes on to exclusively use the word fraction to reference part-whole, measurement, division, and operator examples.

To summarize this whole section, fractions include part-part relationships… just kidding, they don’t. It’s always fun to find that something that should be clear and easy to define is not so clear and easy. This excerpt helped me to understand why it irked me to see part-part relationships so neatly couched under the umbrella term of fractions. The more examples I read the more I realized that despite defining nearly every expression that follows the a/b format as a fraction, the term fraction simply isn’t used that way. Ratios and fractions are words that are clearly separated in secondary mathematics.

Operations with and Manipulations of Fractions

All of this, of course, begs the question, does this really matter? Isn’t this a minor semantic difference?

Despite my fundamental agreement with the Paying Attention document and the purpose behind it, the more I thought about it the more I realized that when it came to formally calling something a fraction I drew the line at part-part relationships (I’m sorry, I couldn’t help myself). Though a part-part relationship expressed in fraction notation certainly looks like a duck, it simply doesn’t quack the same, and that’s the problem I just can’t get past. When fractions are already so complex and nuanced, why add to the confusion by calling things fractions that follow fundamentally different rules as soon as operations are involved?

Let’s use fraction addition to clarify. When adding fractions we need a common denominator, at least to be able to express the answer. If I run 1/2 a mile and rest (yes, I’m a bit out of shape), and then run 1/3 of a mile before collapsing, I’ve run 5/6 of a mile total. I can express that as 1/2 + 1/3 = 5/6. Most of the other definitions of fractions fit with this part-whole approach. 1 divided by 2 plus 1 divided by 3 is 5/6. Whether fractions are “measures, quantities, parts of a whole, locations of a number line, and indicated divisions” they follow the same rules when adding fractions. Part-part relationships do not.

Consider what happens when I accidentally make my chocolate milk too chocolatey (this is contrived scenario, of course, as “too chocolatey” is not a real thing). I make some chocolate milk that is 1 part chocolate syrup and 2 parts milk and decide it’s too chocolatey. I make a second batch that’s 1 part chocolate syrup and 3 parts milk. This one is too bland. So I mix them all together for a mixture that is 2 parts chocolate and 5 parts milk. I might even write that as 1/2 + 1/3 = 2/5. That expression conflicts with everything we know about fraction addition. It doesn’t work unless we clearly put some labels in there to separate it from the other fraction addition. It’s a really cool issue to explore with middle grade students simply as a means of differentiating between fractions and ratios.

What we call fraction addition doesn’t include ratios because adding ratios involves completely different rules. That’s important to note because as students see operations with fractions in the later grades, they rely on the assumption that the fraction does not represent a part-part relationship.

After wrestling with this for a while and reading everything I had on my shelves, here are some key takeaways:

So here’s my plea. As we work with elementary age children and explore the various meanings and representations of fractions, let’s be careful and purposeful in the language we use. Yes, part-part relationships use fraction notation, but a determination to call them fractionscan sow confusion in an already complex topic. When we have terms like part-part relationship, rational number, and ratio, we can be more precise with our meanings and allow our students to develop meaning around the similarities and differences between fractions and ratios.